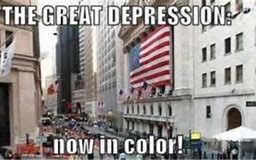 In this time of severe economic downturn, some say Recession, others say Depression, but if I had to choose one, I’d have to say we’re looking at the recession in a rearview mirror, and are cruising down a newly paved, dark, 3 lane highway right into a depression. Along that highway we see signs that read CAUTION, WINDING ROAD, SLIPPERY WHEN WET, SLOW DOWN!!!. As we flew by those signs we now start to see billboards and signs that read Welcome To Depressionville, Population global, please don’t forget to tour our visitor center and pick up a few brochures. We have something for everybody, plenty of suffering to see, plenty of pain to experience ie homelessness, starvation, famine, child molestation, and other forms of child abuse, murder, domestic violence, theft, crooked politicians, the list goes on and on. There’s nothing new under the sun at Depressionville. Whatever your misery we got you covered. The sad truth is with so much suffering and misery spreading throughout the entire world like an epidemic, we’re seeing more, and more desperation, and an overwhelming sense of hopelessness. I know it’s easier said than done when friends, loved ones, or a christian brother or sister says, “just have faith, don’t worry, God will take care of it” because we want results instantly, but what we fail to realize is when we let go and let God, the results are instantaneous. How you ask? well I’ll tell you. The moment you decide to not carry that worry, burden, heavy load and you ask the Lord to lift that weight from you, you have just chosen to live. You have just released the knots in your muscles and your stomach that has been tensing up, and causing pain, you have just released the pressure that has been causing you migraines, sleepless night, and that could have ultimately cause you to have a stroke and or die. You have just taken God up on His promise to give us the peace which passeth all understanding. (Philippians 4:7) God does not want us to worry about anything. (Philippians 4:6) says be careful for nothing, but in everything by prayer and supplication with thanksgiving let your request be known unto God. Simply put we are to bring all our needs, and concerns to God in prayer instead of worrying about them and be thankful for all He has done and all He will do. We are in tough times, but the worst is yet to come. (1 Peter 5:7) tells us to cast all your care upon Him: for He cares for you. All these scriptures are encouraging because I’ve always been a worry wart. It was breaking me down physically, and mentally, until one day after much prayer and agonizing over so many things, (as I wrote in my song… FREE) The Lord told me to” Worry not about what you see, you are free. FLY” I stay prayerful and try hard not to let the problems of this world get the best of me. While sometimes I still get the sensation to worry, I now know when that feeling start to tingle and disturb my spirit, I run to my bible, a fellow christian, and get down on my knees to pray, I do everything I need to do to regain my composure. We can’t get through this time, or the even harder times that are to come without God. Cast you cares upon Him: for He does love you.
MLM
Much Love Majxsty

This site uses Akismet to reduce spam. Learn how your comment data is processed.